Old Federal Road in the Neighborhood of Cohutta Springs

The two pieces of Union correspondence, below, mention Old Federal Road, Cohutta Springs, Spring Place, and other towns. Apparently it relates to the fork of the old Federal Road that went into Murray County, Georgia. The other fork continued west from Ramhurst toward Dalton. I'm not sure if this would be Cohutta Springs "west" or "east." I think it would be "west."

Dalton, August 23, 1864.
Major-General Steedman:
I sent out one company yesterday morning eastward to Holly Creek, beyond Spring Place, and another through Ship's Gap to Summerville via Broomtown Valley; the last will not return till to-night. The first company returned last evening, and report a body of 500 rebel cavalry lying on the Westfield turnpike at the foot of the Cohutta Mountain, about twenty miles from here on the road to Ellijay. They are apparently holding that gap for the protection of couriers or other communications between Wheeler and Atlanta. They came there on Sunday from the diretion [sic] of Columbus, having been sent to learn the old Federal road in the neighborhood of Cohutta Springs on Saturday evening, and to proceed in the direction of Ellijay. This body has two companies guarding the ford of Hold's Creek. I do not think they intend to harass the railroad but merely to hold that gap.
Wm. J. Palmer,
Colonel, Commanding Fifteenth Pennsylvania Cavalry.

Send all your mounted force effective for a march by way of Spring Place and Cohutta Springs toward Savannah, on the Hiwassee River. Colonel Palmer sends a detachment from Dalton by way of Spring Place to Columbus; try to communicate with him. He reports 500 rebel cavalry at the foot of Cohutta Mountain on Westfield road, evidently keeping open communication between Wheeler and Atlanta. Try to break up the line and move on same route to the Hiwassee and co-operate with Colonel Palmer.
J. B. Steedman,
Major-General.

Posted by Southern Muse at 3:27 AM No comments:

Colonel Eli Long came into Cohutta Springs (west) in northern Murray County, Georgia, on February  22, 1864, before the first Battle of Dalton. He was en route to Dalton, Whitfield County, Georgia, and Murray County was a back way into Whitfield County. Long camped at Waterhouse's Mill, near the Conasauga River. Neither the county name nor the place name of Cohutta Springs is ever mentioned in Union Correspondence, and the area probably was not known to the Federals as Cohutta Springs. The post office had suspended delivery of mail to that area during the war, and there probably would be no markers in the vicinity of the mill. Union correspondence always refers to the place by some description, such as "Waterhouse's Mill" or "south of the Connesaga" (River). In his Feb. 1864 reconnaissance, Long received ambiguous orders and had to ask for more information about his mission, due to confusion over the roads in the area. He had been asked to communicate with Cruft at Red Clay, but Red Clay is about twelve miles west of Waterhouse's and cannot be reached directly from the road he is calling the Spring Place and Cleveland Road. Interestingly, in his earlier report, he names the road, but does not yet know the name of the place (Mr. Waterhouse's house). In a later report, he names his campsite of the 22nd as Mr. Waterhouse's house, and calls the road "Spring Place Road."*

Link to 1863-1865 post with map (drafted 1863-1864; published 1865) showing the area south of the Conasauga River, but not designating Cohutta Springs P.O. The relevant area on this map is the road running from Spring Place directly north toward Benton Pike, just where it intersects a road that runs southeast toward Ellijay. The place name of Cohutta Springs (where the post office was located from 1836 until at least 1865) does not appear on the map. However, east of that area, on a road running parallel to the S.P. and Cleveland Road, is "Cohutta Springs" (Cohutta Springs, east), where the resort and mineral springs would be located. MAP AND DESCRIPTION.

Full Citation: The War of the Rebellion: v.1-53 [serial no. 1-111] Formal reports, both Union and Confederate, of the first seizures of United States property in the southern states, and of all military operations in the field, with the correspondence, orders and returns relating specially thereto. 1880-1898. 111v
The War of the Rebellion: A Compilation of the Official Records of the Union and Confederate Armies. Pub. Under the Direction of the ... Secretary of War, United States. Record and Pension Office. U.S. Government Printing Office, 1891. Original from: Pennsylvania State University. Digitized: 6 July 2011.

------Report of Col. Eli Long [Hdqrs. Second Brig., Second Div. Cavalry, near Lee's House, Ga., February 27, 1864], 472. http://bit.ly/OfficialRecords-I-43-3-Eli-Long-at-Lees-House
*Typically these main roads run between two towns and are named, in a broad sense, for both towns; hence, "Spring Place and Cleveland Road." Locally, the people in Cleveland or Charleston, Tennessee, would probably refer to it as "Spring Place Road," while people in Spring Place would refer to it as "Cleveland Road" or "Charleston Road."

Posted by Southern Muse at 12:25 AM No comments:

Cohutta Springs as a town is no longer extant. Historically, the community of Cohutta Springs covered a broad area from south and east of modern-day Cisco, Georgia, to north and east of modern-day Crandall, Georgia. On maps from 1836 to about 1900, the area is marked either Cohutta Springs or Cohutta Springs P.O., and it lies on a road that ran between Spring Place, Georgia, to an area east of Cleveland, Tennessee, and on up to Charleston, Tennessee. Today it would be located on Georgia Highway 225, near the intersection of Hall's Chapel Road and Georgia Highway 2. There are several other small communities dotted throughout the area, each with its own unofficial place name (no longer receiving mail via the place name, but sometimes still called by its old, traditional place name). Some old maps have two separate spots designated as "Cohutta Springs." Other maps have one or the other, but not both. Our blog features both areas, and will usually try to differentiate by saying "east" or "west."

Posted by Southern Muse at 10:29 AM No comments:

Cohutta Springs (east) is the location of an old historic mineral springs. It was a resort area featuring a hotel, boarding houses, cabins, and accessible mineral springs, thought to be of medicinal value. There were doctors and pharmacists there at various times. In the 1860s, Myra Inman, of Cleveland, Tennessee, summered there. Alexander Stephens, vice president of the Confederacy, once stayed there. It is near the old Summerour Chapel. Later, there was Old Summerour Methodist Church; and now, Amazing Grace Baptist Church. The history of the area is evident in the names of the cemeteries and streets. Amazing Grace Baptist Church is now the only church on Summerour Church Road. The Summerour Methodist Cemetery is across from there, and Old Summerour Cemetery is just east/northeast of there, across the railroad tracks. Summerour Church Road runs into Cohutta Springs Road. Both roads intersect U.S. Highway 411 on the west.

Cohutta Springs Road leads to the old mineral springs area, which is now on private property. Cohutta Springs Conference Center, owned by the Georgia Cumberland Conference of Seventh-Day Adventists, owns part of the land near there. The mill ruins may be on their property. The property on the south side of the road, where the old hotel ruins are, is owned by other neighbors.
Posted by Southern Muse at 12:59 AM No comments:

Cohutta Springs in the 1870s

Murray County had not seen a major battle on its soil during the Civil War. Perhaps part of the reason is that the railroad had not yet been built down to Murray. Times were difficult after the War. Even so, Cohutta Springs must have still been popular as a resort and watering place, if this Atlanta physician found it desirable to summer there and treat patients. 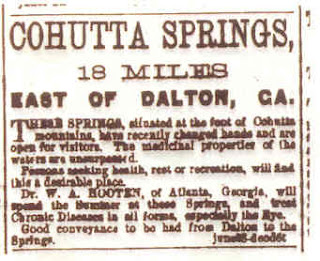 "Dr. W.A. Hooten of Atlanta, Georgia, will spend the summer at these Springs, and treat Chronic Diseases in all forms, especially the Eye."


Possibly, Dr. Hooten planned to treat, or perhaps capitalize on, sore eyes, a disease that was prevalent during the Civil War. Jacob Headrick, of the "other" Cohutta Springs (west) had suffered from sore eyes, a contagious disease that broke out in camp and spread among the soldiers.

These mineral springs were in the area of Cohutta Springs (east), northeast of the old Summerour Chapel.

Cohutta Springs in the 1860s

Cohutta Springs, west: Thomas Calloway, of Cleveland, Tennessee, and his nephew, Callaway Campbell, owned land near Waterhouse's at the "other" Cohutta Springs (five miles west of the mineral springs). That Cohutta Springs was on the Spring Place and Cleveland Road (now Georgia Highway 225, where Hall's Chapel Road and Georgia Highway 2 intersects 225). The area was scouted by Union soldiers in 1864. Colonel Eli Long, U.S.A., camped at Waterhouse's plantation in February 1864, en route to the First Battle of Dalton.


(Note: I did a quick Wikipedia lookup to verify the name of the vice president of the Confederacy.)

Clearer references to the Myra Inman diary (book), Sara Wadley diary (on-line excerpts), and the Callaway Campbell letters (library holdings) will be given later.
Posted by Southern Muse at 11:33 AM No comments:

Cohutta Springs in the 1840s

Homesteaders poured into Murray County after the 1838 removal of the Cherokee. Land speculators had bought the land cheap. They quickly resold it at a profit ~ some in whole lots, others subdivided into halves and quarters. Many of the county's early residents were from nearby counties in Tennessee. (My own genealogical research shows that northern Murray County was pretty much settled by East Tennesseans from Blount, Sevier, and surrounding counties in Tennessee). The early days of settlement were pretty rough ~ there were some lawless elements in the county.

Once again, not much is known about these early times. Possibly, more research on the old deeds, plats and abstracts will help. My own speculation is that there were already grist mills in the area even before the Cherokee removal. An 1866 deed for lot 320 mentions a place where an old mill once stood. Allowing for time and the elements, one might assume that something as substantial as a mill had been there for at least twenty or thirty years before it disappeared, which might place it into the 1830s or earlier. (See notes below).*

*NOTE: My curiosity has been piqued in a big way by the old mill. It's a little tricky to research. I haven't walked up there myself. The location is in the woods, well north of the old Coffey Mill of the early 1900s, near North Cohutta and Hampton Springs. Crandall residents are familiar with the mill site. Differences in the old surveys of different eras make it a little tricky to line up the exact corners of lot 320 and the same lot on the modern map, as it it marked. The mill was on or near the old one-acre plat reserved by Morris and/or Edmondson in those very early deeds.

Posted by Southern Muse at 11:13 AM No comments:

Loss of the Old Mill

The old ruins of the mill and dance hall on the property of an old, historic mineral springs always interested me. I loved to visit the old mill when it was still standing. The diagonal timbers were pretty, I thought. The massive wooden beams of the mill were something to see. I first visited it as a child in the late sixties or early seventies. Even then, it was falling in. In the seventies, the Georgia Cumberland Conference of Seventh-Day Adventists bought the property and built a new conference center and lake a half-mile or so from the older ruins. The mill was in hazardous condition, already falling into the creek. No one then had the money to restore it. The new owners demolished it, but first, they created a history project to document all they could learn about the mill, mineral springs, and old resort. They spoke to neighbors and collected stories, deed histories, and a bit of genealogical information. The mill is now gone, but not forgotten.